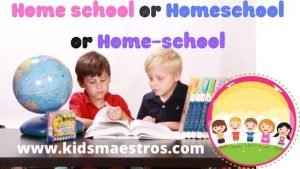 Homeschooling refers to educating a child by the parents, home tutors or online tutors at home or other places except in formal schools. This is also called home education. It usually covers the provision of education to the children other than in educational institutions. However, It is important to remember that homeschool is regulated by the state or country rules and regulations.

Very often, a great debate and confusion arise whether to use homeschool, home school or home-school. In this very short article, we will clarify what is used traditionally and what should be used in a standard situation. We are also about to shed light on what is trending for the near future.

Actually, it is the trend that two single words come closer with a hyphen first and with the passage of time, they become a compound word. Homeschool is passing the transition to achieve acceptance as a compound word in the near future.